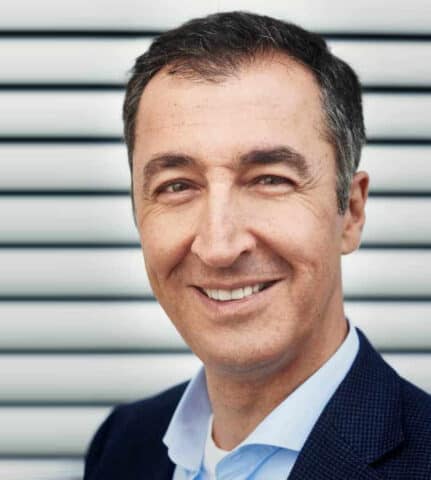 By profession, a trained educator, Cem Özdemir completed his studies in social pedagogy at the Protestant University of Applied Social Sciences in Reutlingen in 1994.

Since December 2021, he is the Minister of Food and Agriculture in the Scholz cabinet. In 1994, he was the first member of the German parliament of Turkish origin to be elected to the German Bundestag for Bündnis90/Die Grünen.

From 2004 to 2009, Cem Özdemir was a member of the European Parliament and foreign policy spokesman for his parliamentary group.

From 2008 to January 2018, he was the Federal Chairman and top candidate of Bündnis 90/Die Grünen in the 2017 Bundestag elections.

Today, he is Chairman of the German Bundestag’s Committee on Transport and Digital Infrastructure, a deputy member of the Foreign Affairs Committee and Chairman of the cross-party parliamentary group on rail transport. Cem Özdemir is married and has two children.