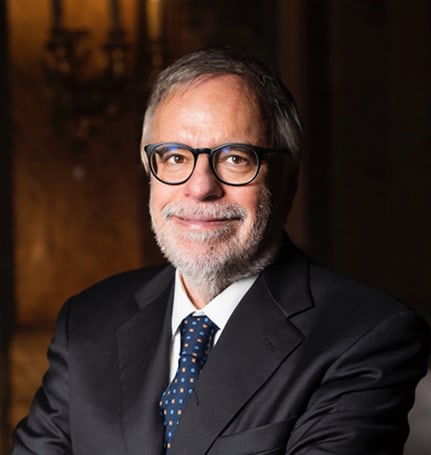 Andrea Riccardi is also known internationally for having founded, in 1968, the Community of Sant’Egidio. In addition to its social commitment and its many development projects in the southern hemisphere, Sant’Egido is known for its commitment to favoring peace and dialogue. Andrea Riccardi played a role in mediating various conflicts and contributed to attaining peace in several countries, such as Mozambique, Guatemala, Ivory Coast, Guinea. In 2003 TIME magazine included him in their list of thirty-six “modern heroes” of Europe, individuals that stand out because of their professional courage and humanitarian commitment.

An expert in contemporary humanistic thought, his is an authoritative voice in the international scene. He contributes to many daily and periodical newspapers, including Il Corriere della Sera. He is a scholar of the Church in modern times and of religion in general. Among his publications are: Il secolo del martirio. I cristiani nel Novecento (‘The Century of Martyrdom. Christians in the 20th Century’, Milan 2000-2009; translated and published in several languages); Convivere(‘Living Together’, Rome-Bari 2006, translated and published in several languages ); Il “Partito romano” (‘The “Roman Party”‘, Brescia 2007); L’inverno più lungo. 1943-44: Pio XII, gli ebrei e i nazisti a Roma (‘The Longest Winter. 1943-44: Pius XII, Jews and Nazis in Rome’, Rome-Bari 2008). In 2011 he published Giovanni Paolo II. La biografia (‘John Paul II. The Biography’, Cinisello Balsamo 2011, translated and published in several languages), which draws a comprehensive picture of the Pontiff as a key personality in the 20th Century. In his book La sorpresa di papa Francesco(‘The Surprise of Pope Francis’, Mondadori, Milan 2013, translated in five languages) he examined the first key elements of the pontificate against the backdrop of the challenges of the globalized world. Among his most recent work is La strage dei cristiani – Mardin, gli armeni e la fine di un mondo (‘The Slaughter of Christians – Mardin, the Armenians and the End of a World’, Laterza, Rome-Bari 2015), Periferie. Crisi e novità per la Chiesa (‘Peripheries, Crisis and Novelty for the Church’, Jaca Book, Milano 2016); La forza disarmata della pace (‘The unarmed Strength of Peace’, Jaca Book, Milano 2017); La Chiesa brucia. Crisi e futuro del cristianesimo (‘The Church burns. Crisis and future of Christianity’, Laterza, Roma-Bari 2021).

On 21st May 2009, he was awarded the Charlemagne Prize, which is assigned to public figures and institutions promoting a united Europe and contributing to spreading a culture of peace and dialogue. whose life epitomizes the history of the last century. The motivation reads: “In tribute to his outstanding involvement for a humane Europe exemplifying solidarity inside and outside its borders, for understanding among peoples, cultures and religions, and for a more peaceful and just world.”

From 16th November 2011 to 27th April 2013, he was Minister for International Cooperation and Integration Policies of the Government of Prof. Mario Monti.